So it's not exactly in working order yet, but here's, EFFin' Unsound. Please kick the tires and make fun of the first couple posts.

Some stuff I never got around to 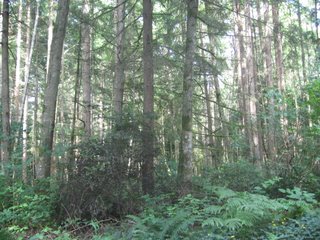 Only the foreground is Vashon: 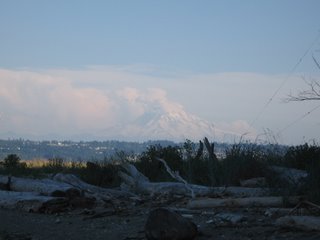 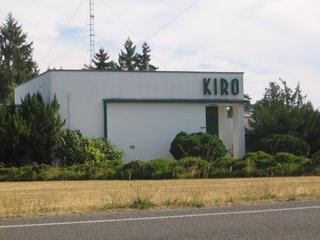 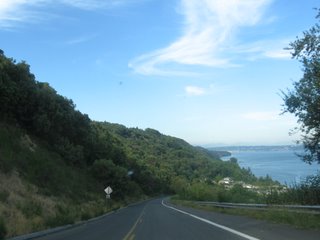 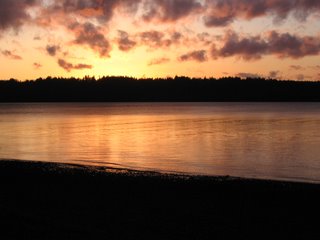 I started reading the Washington State Political Report when it was barely 2 months old. My first comment appeared on February 29, 2004. Less than a month later, Carl announced a short break and I suggested that he add a couple of guest bloggers to fill the gap. He immediately asked me to join in and, despite my protests that I was far too partisan for such a civilized forum, he prevailed. My first post appeared on April 4, 2004, and I have been posting occasionally ever since.

Working for the Washington State Political Report has been a wonderful experience. Even though he realized that I was partisan, sharp-tongued, and generally a bitch, Carl has been unfailingly patient, tolerant, and encouraging. Carl is far and away the best boss I ever had.

This opportunity to write for Carl came at a critical time in my life. After 3 years in law school and three more years practicing administrative law, I realized that I had lost all respect for the Washington justice system. For me, and pharaphrasing V.P. John Nance Garner, being a lawyer in Washington isn't worth a bucket of warm piss.

[Note to Goldy: Your dear Mother really didn't want you to become a lawyer. It is difficult to be a good person when you are surrounded by soulless snakes that are propped up by a corrupt judicial system and backed by a bar association that is run by thugs. Lawyers have a bad reputation, but the reputation that they actually deserve is far worse.]

My work for the Washington State Political Report let me find my way back into the company of decent people and the realm of intelligent discourse. Carl, I am far more grateful to you for this opportunity than I can ever describe.

Looking Back: A Look Back

Some of my favorite posts throughout the years:

Probably my mostest favoritest post of all time (I know, it should be veggies first, but what are you going to do, stop reading the Political Report?) was when I went to the '04 Maggies (Scroll down). Listing famous people is still funny, and Garrison Keilor rules!

This delightful attack on an otherwise unknown rightie who tried to attack something I didn't say made my week and was the most fun I've had writing here in some time.

I really liked Letter to Your Legislator Week even if it didn't really pan out. And letter to the Editor week when it did (Scroll down).

I got a letter published in the Seattle Times. It's hard to believe that at the time it was controversial to say that there were a lot of local liberal blogs. Also, remember when Washblog was on typepad? Good times. I think this was the first time I ever saw myself as an evangelist for the local lefty blogs.

I love writing open letters. From the first one (not Washington State!, scroll down) to the most recent one to Dori Monson.

And finally, having Brenda here was a hoot. She was more able to wrap herself around an issue and not let go than me. My favorite instance was here going after NWCN for under reporting Kerry's rally numbers (scroll).

Writing on the minimum wage over at NPI:

It isn't, however, the first time Republicans have tried to convince us that we can't have strong businesses and a living wage. In Washington State we have been proving them wrong for almost a decade. In 1998, Washingtonians overwhelmingly voted to raise our minimum wage for every worker to one of the highest in the country, and our economy continues to thrive. Why would we change course now?

There is a better choice than what the Republicans offered – we can increase the minimum wage fairly for all working families and we can do it without penalizing Washington and six other states for already doing right by our citizens. I've been working in Congress to increase the minimum wage, because I know that Washington State's example shows how we can do much better for all our working families. We should not settle for anything less.

So here are the cold hard facts on why I am voting to protect the Washington State minimum wage.

The Republican proposal is a bait and switch. They wrote the language so that it preempts our state law. What they're calling a minimum wage increase is in fact a minimum wage penalty for 122,810 workers.

Goldy knows the score in The Stranger.

Now don't ask me why gay marriage threatens the institution or how Dan's long-term, loving relationship undermined my own. I'm no lawyer or conservative legislator. All I know is that five of nine elected justices ruled that committed, monogamous faggotry like Dan's is responsible for my marital discord, and that's good enough for me. My marriage was also damaged by plaintiffs like Johanna Bender and Sherri Kokx and their young sons Zach and Quintin, to say nothing of David and Michael Serkin-Poole and their three grown children.

As it stands now the Defense of Marriage Act isn't much of a defense anyway—my own marriage failed three years after its passage. To defend straight marriages like mine, DOMA needs to be strengthened.

Oh sure, if we really want to defend marriage and "encourage stable families" I suppose we could work toward providing all our citizens a living wage, universal health care, affordable child-care, and other essential services that help relieve the financial and day-to-day stresses of the average, two-working-parent household. But all that costs money, whereas blaming the gays is free as the air we breathe.

I Thought Initiatives were sacrosanct

To the Republicans. We keep hearing how we have to respect the initiative process. How we have to respect any hair brained idea that gets 50% +1. But when a truly popular initiative like I-688 sets our minimum wage, our representatives ought to listen. But the Republican party is bragging about lowering our minimum wage for waitresses. For baristas. For anybody who needs tips to make ends meet. Bragging about how they'd lower my sister's wage.

"When given a chance to deliver for the people of Washington state, Cantwell instead folds like a cheap tent and bows to her party leadership's wishes. She should look no further than this vote when given her pink slip in November."

Soon to be Signing Off

So, I actually make news (such as it is) on this week’s podcast: Namely that this very blog is soon to be defunct.

When I started writing here, there weren’t many people writing about local politics (I predate Horses' Ass and (un)Sound Politics) and even fewer writing from the left. And I couldn’t be more thrilled with the competition both that I’ve discovered and that I’ve seen start up. Where once, writing about Washington State seemed like a narrow focus, now it seems quite wide. And there is some burn out writing the same sort of blog for a few years.

And in that time, I’ve seen both a growth of the local lefty blogtopia (Yes! someone with more longevity than me coined that phrase!) and of course the rightie local blogistan. And in that time, my favorite blogs have switched too. From the blogs in the molds of the Atrioses and the Koses to more of the Sadly, No!s and the Fire Joe Morgans. So I’d like to keep doing local, but be meaner and more focused on the right wing. There’s already a blatherwatch, of course, but there isn’t anybody who calls bullshit on the unsound politics and the Bill Virgins of the world on a regular basis.

So, you may have noticed a few longer form pieces in the last couple months or so that are more thought out and more thorough than I normally do. And often hitting the right more. That’s the sort of thing I’d like to do more of and will probably make something of it. Also, what the hell, on an actual web page and not this blogger nonsense. It’s the future, baby! So after Friday, I’ll probably take some time off and then launch something like that.

Alls I needs is a title. I’m thinking EFFin’ with Stefan but that might be too long/retarded. So, this Friday will probably be it from me.

Darryl was there, and he links to other people's takes.

It was from an Inslee event that we all learned the phrase "frog march." I bet Ambassador Wilson has a lot to say about his and his wife's lawsuit this time. I was a volunteer at the 2004 kick off, and it was decidedly a hoot.

From The Gadflyer, we learn that the Republican scheme to increase the minimum wage may actually reduce the State minimum wage for many Washington State employees who depend on tips.

Speaking of Cantwell, she's certianly taking the fight to big oil. My favorite moment with her and the big oil execs will always be when Ted Stevens went nutty because she wanted to swear them in.

Lynn over at Evergreen Politics has a great write up of the Bill Clinton/Jim McDermott event.

Well, Cantwell has stopped the bleeding. And her ads have been decent if not ground breaking. I don't trust our incumbents to win with anything below 55%. It's the paranoid in me who knows you have to work work work to win. Still, 48-37 is much nicer to see than closer.

This piece is probably OK, and is almost certainly more OK than Reichert's previous one. Still, you'd think if he took a hit once, he might be a hair more cautious. I guess not.

She nabbed the Sierra Club endorsement.

Dan Savage in the NYT

whether or not they sympathize with the victims

Lynn has the goods on David Sirota in town.

Howie has the whole statement.

Violence against anyone because of ethnicity or religion does not advance the cause of peace, justice and liberation in Lebanon, Palestine or Israel. Attacks on civilians must stop in Gaza, Beirut, Haifa, and certainly in downtown Seattle.

I'm sorry I'd missed it before, but wow!

Let me suggest that the President who started the war in Iraq based on false information, the President that mishandled Hurricane Katrina relief, the President who has created the largest deficit in the history of the solar system, is not entitled by any law, religion, morality, ethics or common sense to dictate to the American people one sense of morality, much less any others.

Please please please Ted Stevens should totally be on the Daily Show. And if he could talk about how much he hates Cantwell, that would be nice.

It is sad watching an old man who will do anything to hold on to power.

The mostly complete list is on line for state and national candidates.